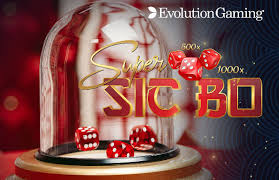 An ancient Asian Dice Game of Sic Bo has never been so exciting up to the present. Super Sic Bo is a remarkably simple but also quite thrilling game with its multipliers provided by Evolution Gaming. 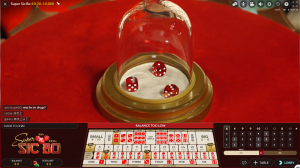 The objective of Super Sic Bo is to predict the total sum of the shake of the three dice at the end of each round. The Dice are rolled in a dice shaker right after bets are closed. Multipliers, the excitement of the game, is applied just before the dice land and the result of the dice is determined. Thus, if players place their bet on the spot where multiplier applied then, the bet of the player multiplies accordingly.

Super Sic Bo presented in a greatly designed online studio environment by a host. The live game presenter sits at a small table where a glass-domed dice shaker is placed. Three six-sided dice are put inside the glass dome (Sic Bo). When betting time has ended the Sic Bo dome starts vibrating in order to shake the dice. It takes just a few seconds and when vibration stops the dice land and the result determines.

Super Sic Bo game is featured enthusiastically. The game offers many betting options such as numbers, combinations of numbers, triple numbers etc. Random multipliers are not applied on ODD, EVEN and SMALL, BIG bets. Let’s take a look closely at the betting type.

Odd / Even: Result of three dice can be one of those ODD or EVEN. These bets lose to any triple.

Total Sum: If bets are placed on a specific number of the total sum of the three dice from 4 to 17 excluding 3 and 18.

Double: Bets can be placed also on any of the double combinations of the six face values of three dice. Bear in mind that, this can also be three dice showing the same number. However, the payout is considered a double payout.

Triple ( specific or any ): Bet can be on any of the triple combinations of the six face values of three dice. There are two options; the first one can be a specific triple which means that all three dice should exactly be the same number as bets, the second one can be any triple option which means that all six different triple bet combinations are covered in a lump.

Combinations: Bets can be placed on any of the choices of 15 potential two dice combinations or all can be covered at once

Super Sic Bo, uniquely redesigned the ancient dice game, was released to the market by Evolution Gaming. The top software provider boosted the enthusiasm of the game by random multipliers that can go up to 1000x time the stake. If you like the dice games then do not miss your chance, Super Sic Bo is absolutely for you. Apart from that if you are looking for something new with huge profits, please place your bet and give it a chance.