Live Casino entertainment is on the cusp of a new era. Evolution Gaming redefines the style of the Online Casino worldwide by innovating and creating new sophisticated and intelligent games which no other software providers could think of.

This is beyond imagination. First Person games allow players to decide the timing of the game. If you are a type of person that would like to take time for each betting round and do not want to be stressed by counting down or kind of a person who would speed the game up. Here we go! This game is exactly designed for that. This game range is capable of assisting thousands of concurrent players. Moreover, another nonesuch feature of the First Person game is ‘GO LIVE’ button that transfers players directly to the Live Casino Table of the game. So that, if you would like to switch the game and play with a live game presenter you just need to tap ‘GO LIVE’ button, you will be taken on a journey and be transported to the live version of the game.

First Person Blackjack is an RNG based live dealer game that is oriented with 3D technology and user-friendly User Interface. However, this is not a Live Blackjack as there is no live game presenter and no other players at the table. This game is designed for those who want to play alone against the computer in a 3D animated casino environment. 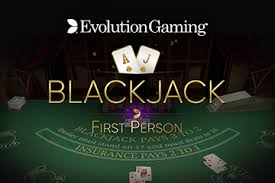 Apart from the above mentioned features, the objective of the First Person Blackjack game is the same as any other Evolution Blackjack Game.

First Person Roulette is a single-player game of standard European Roulette. This 24/7 online RNG based live game has 3D animated immersive technology. Same as First Person Blackjack, there is no live game presenter and no other players at the table. 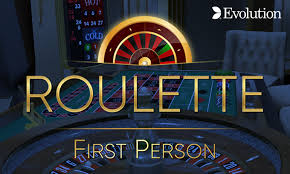 First Person Roulette game is not different from any other Evolution’s standard Roulette Game. The objective is that to predict the number the ball will land after each spin around the roulette wheel. Betting options are the same, it is no different than a standard roulette game. As well, this is a ‘One Zero’ game. Should you check the stats of the game? Then please bear in mind that statistics of the game will be built once you start the game. Once you place the bets and are ready to play, then press ‘SPIN’ button. Only one new feature implemented on the table is that ‘GO LIVE’ button. Once it is pressed, you will be taken to the Live version of Evolution Roulette Game where you can play on a table with Live Game Presenter.

Evolution Gaming brought a new perspective to Random Number Generator games by adding electrifying multipliers and creating Live Lightning Roulette integrated with First Person Gaming. This game, one of the newest additions of the First Person Game series, is a standard European Roulette with single-zero and main no different than the other Roulette. 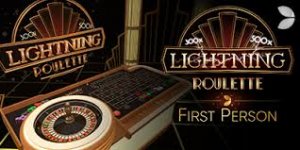 Between one and five random lucky numbers will be selected before every round of the game and random multipliers from 50x up to 500x will be assigned to selected lucky numbers. Here is the excitement! Players have the potential to multiply their winnings if one of the Lucky Numbers struck by lightning is where they place their bet ( should be straight up ) and the ball lands on that lucky number.

Apart from that, as this is a single player game, once you are happy with your bets and ready to play, you can activate the game by pressing ‘SPIN’ button.

As you might know, Dream Catcher is one of the biggest show games in the online casino industry and is played with a huge vertical multi segment spinning wheel. This is a highly easy play game. Players bet on the segment which they predict the wheel will stop. Of Course, adrenaline booster multipliers 2x and 7x are attached to the wheel. 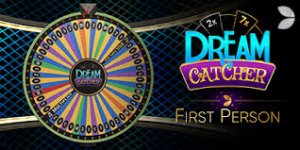 In the First Person Dream Catcher version of the game, you will be thrilled by its amazingly designed 3D animated environment. The option of speed slider lets players control the game speed. ( Fast, Normal, Relax )

‘GO LIVE’ function is also included in this game. Players who would like to continue in Live Dream Catcher game with a live wheel and live game presenter, should press ‘GO LIVE’ button. 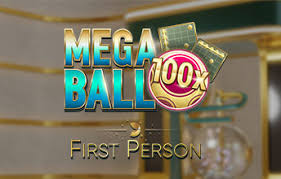